The PacificAus Sports Netball series will take place in the Sunshine Coast from the 16/21 October 2022. The event will see hosts Australia welcome the Fiji, PNG, Samoa and Tonga and an Australian representative team for a week of competition.  These games will be live streamed.

The Netball World Cup 2023 will take place in Cape Town South Africa from the 28th of July to the 6th of August 2023. 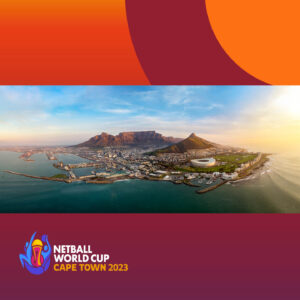 The 2023 Pacific Games are a continental multi-sport event with participation exclusively from archipelagic countries around the Pacific Ocean that is scheduled to be held in Honiara, Solomon Islands between 19 November to 2 December 2023.  The Netball competition will be hotly contested by eight Pacific countries.

Fill in the form and our team will be in touch, or you can email us on oceanianetball@xtra.co.nz

In order to assist us in reducing spam, please type the characters you see

Oceania Netball actively promotes and encourages netball to further its growth and development in the region.

All events include two sections: Championship  (members ranked 1-16 inclusive) and Challenge (members ranked 17 and below). Games of the U21 event are not ranked, many of the players do participate in their Senior National squads.